At it’s origin, the chateau was of some importance. Some remains were found on the site of artefacts which bear testimony to the sanctity of the old chapel. An ancient baptismal font was discovered which has now been carefully positioned in the chateau’s salon. By the chateau’s ancient front door, is positioned a font, such as would contain blessed holy water for the inhabitants to cross themselves with.

This ancient castle was built at the beginning of the 15th Century with some parts having been constructed towards the end of that century. It is essentially an old fortress or stronghold belonging to the barony of Montmorillon. The castle dominates the Asse valley as does the old fortress of Peutro or the ruined castle of Fleix both nearby. These fortresses, built at the end of the Middle Ages bear testament to the climate of insecurity at the time linked to the border position of our village, Brigueil-le-Chantre, between English Poitou and the French Berry region, the Hundred Years War and the incidences of pillaging by brigands and bandits. 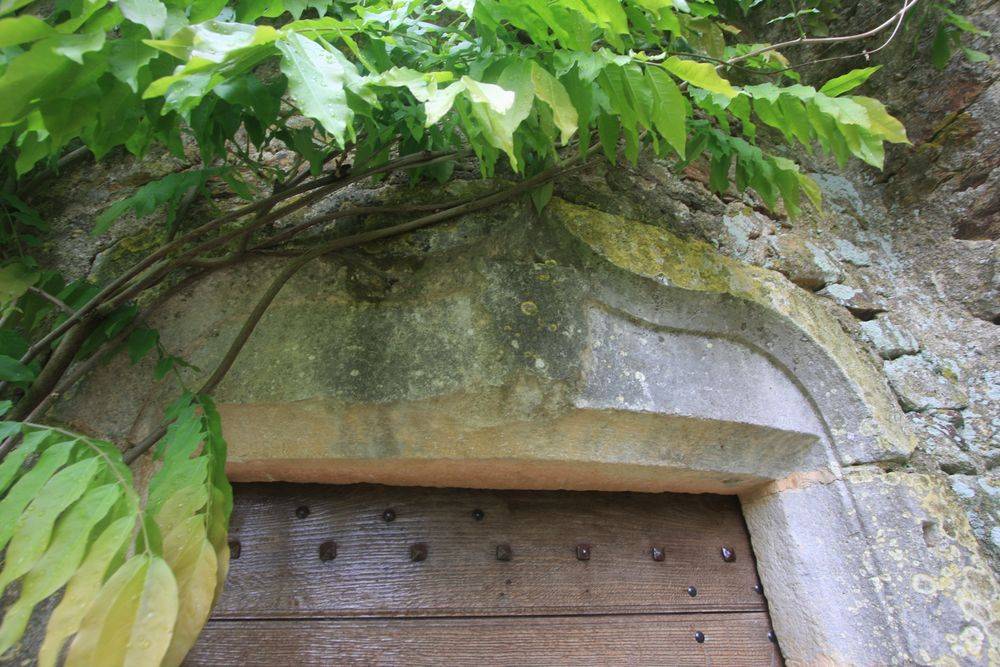 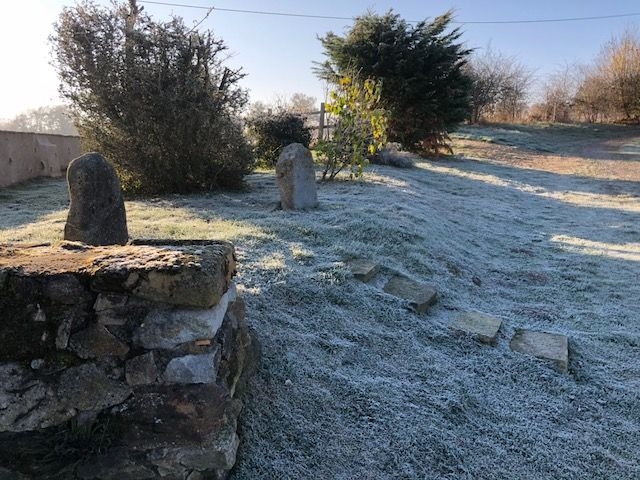 We know that in 1494, Jean the 1st of Mareuil, became the first lord inhabitant. “It is undoubtedly him that had built the dwelling on the right, which later became a barn.” He is described as “sword bearer, squire, and lord of said place” and his coat of arms is engraved on a chimney (fireplace) of the time (building on right), we believe this to be the Donjon. From that time on until 1654, the chateau was occupied by the descendants of this lord as follows:-

In 1523: by Paul de MAREUIL, squire-lord of the said place

A son of this seigneur, during a hunting party, was killed by the Chevalier, Louis de BLANCHARD, lord of Bourg-Archambault. This lord, Louis de BLANCHARD, was condemned to death, in absentia and by default. Subsequently, he obtained a letter of remission from King Louis XIII.*(see separate paragraph) 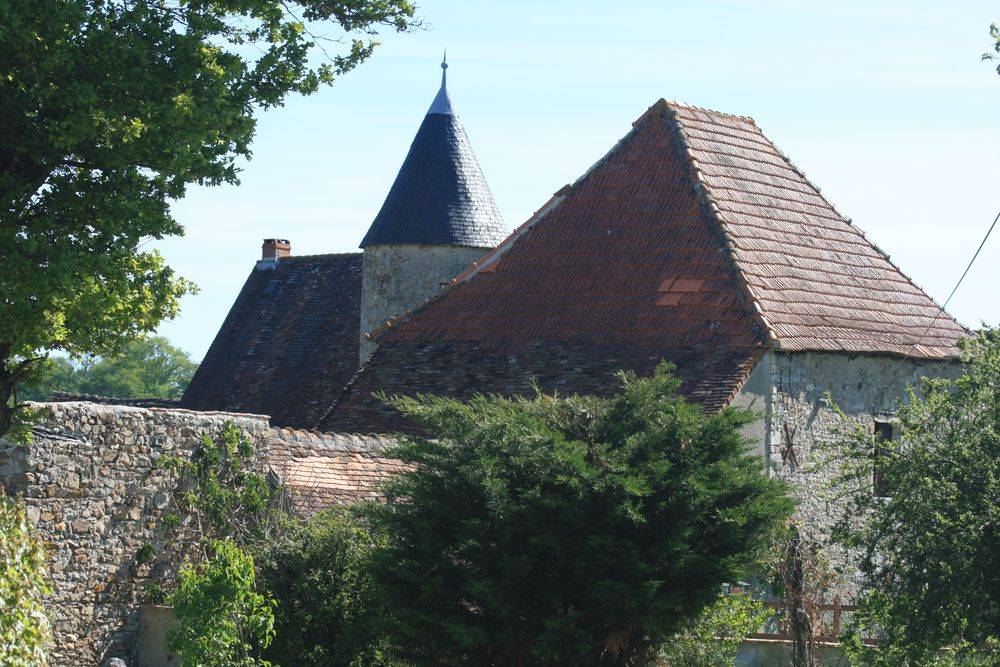 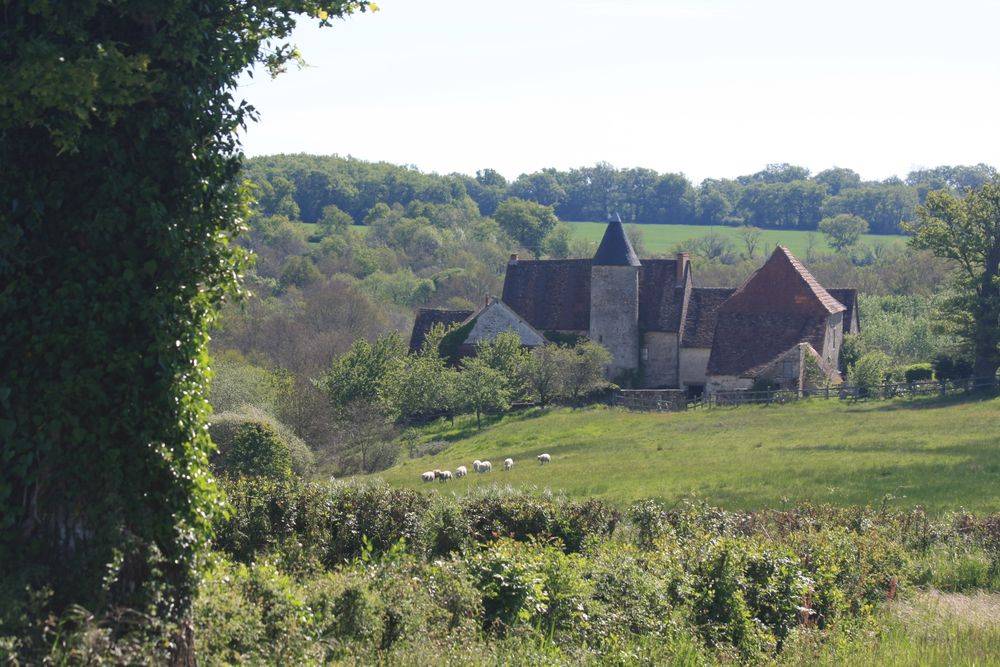 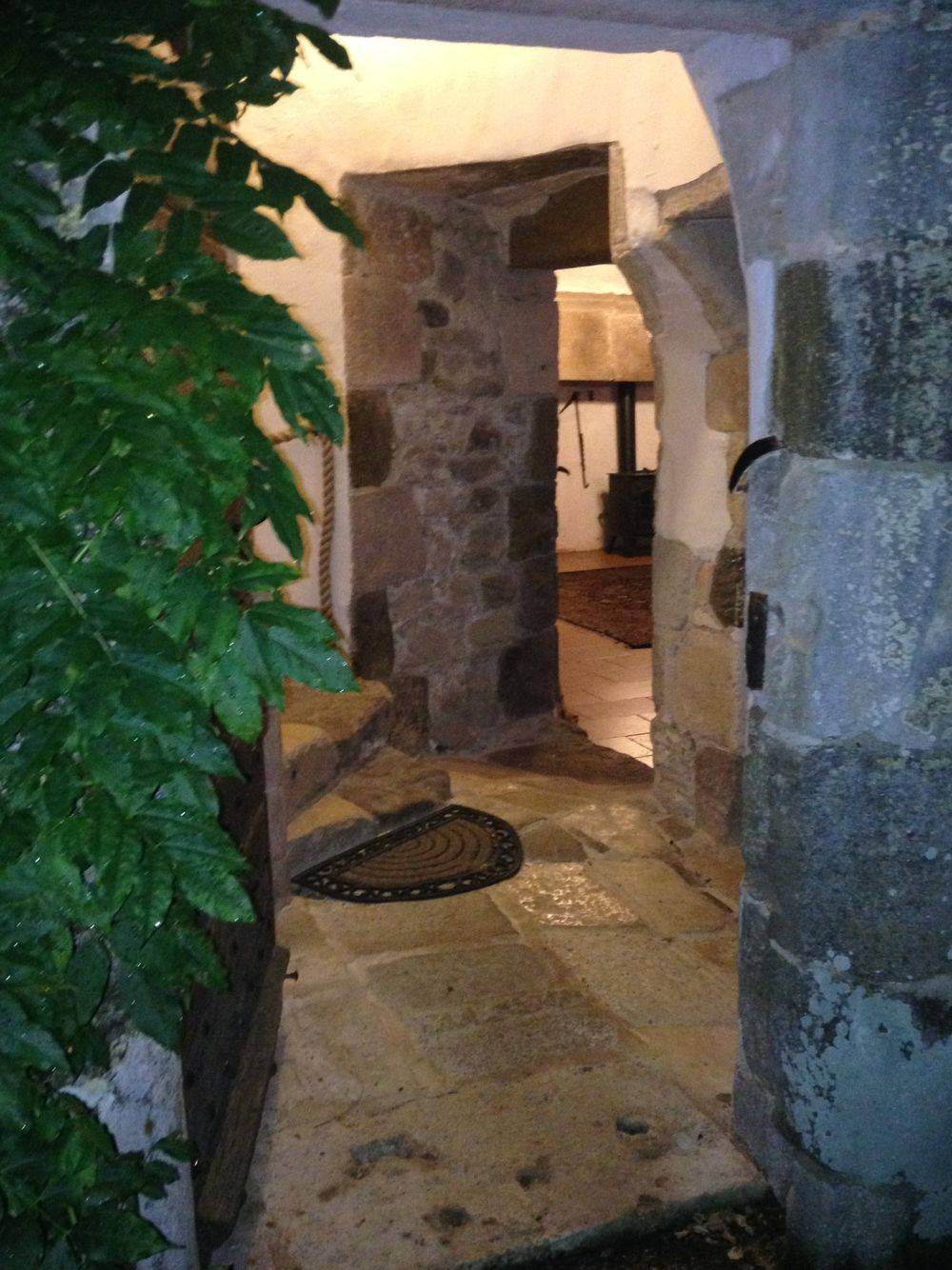 In 1654, the Château de MAREUIL was the property of:

Louis FOUCAULT of St-GERMAIN of BEAUPRE, Vice Admiral and Bourg-Archambault which he bought in August 1654. In the year of 1653, He was a “Marechal de France. From 1190 to 1791, there were only 256 Marshals of France. The title was created by Philipe Auguste in 1190 and was one of the great offices of France. The title was abolished in 1793 after the revolution by the National Convention. Louis died in 1659 when the castle of MAREUIL became the property of his daughter.

In 1672: Isaac REGNAULT de PONS, Marquis of the CAZE, husband of Constance FOUCAULT was the owner

In 1761: The castle of MAREUIL was bought by: Jean-Louis LIGNAULT, Marquis of Lussac-Tilly and other places.

In 1789, after the revolution, the castle of MAREUIL was sold several times and it is on the 8 MARCH 1890 that it passes via the office of Master GAILLARD, notary to LE DORAT (HV). The castle of MAREUIL then became the property of the EMMANUEL FAMILY – JOUBERT

The Joubert family occupied the castle and farmed the adjoining lands for over 100 years. Many of their relatives and others who worked for the family still live locally and we have had the pleasure of meeting some of them and showing them the chateau as it is today – we have received many complements for the improvements we and others have made here.

Pending further research, we think the JOUBERT family sold the chateau de MAREUIL in 2000 to a buyer from Belgium who we think was responsible for some renovations.

In approx 2003, the Chateau de MAREUIL was bought by Charles & Maarit GREEN from Devon, ENGLAND. They continued the renovations and were responsible for creating beautiful gardens at MAREUIL.

In April 2015, the chateau de MAREUIL was bought by us, Lee & Belinda PRINCE from Kent, ENGLAND. To date, we have renovated the former chapel, the bathrooms and created a new studio apartment from former pig barns adjacent to the two bedroom cottage on site. We have also added a significant swimming pool and started work on renovating the ancient Donjon (the building with the engraving of JEAN 1st of MAREUIL). This now has a new concrete floor but is awaiting some roof repairs.

At the time of writing this short history of such an ancient site, there are up to 7 separate (or semi attached), constructions or dwellings.

The Donjon or Castle Keep

We have given this ancient place the name of “Sky Garden” as it sits so prettily high up surrounded by trees with only the birds flying high above.

We have no records of it’s history but our initial research, and specifically taking into account the unusual pentagonal shape, leads us to believe that it may date back to the latter days of the Knights Templar. This would suggest that it was originally constructed as a very tall tower with it’s commanding position overlooking the river Asse. It may have been inhabited or used for storage or both. It is most likely that when it was demolished, the stones and other materials were used in the construction of the Donjon, which we believe was the next construction on site.  This is proven by the re-purposing of a significant structural oak beam originally used in the Donjon, which is now a supporting beam in the chateau salon - this has been measured by laser to establish probity. 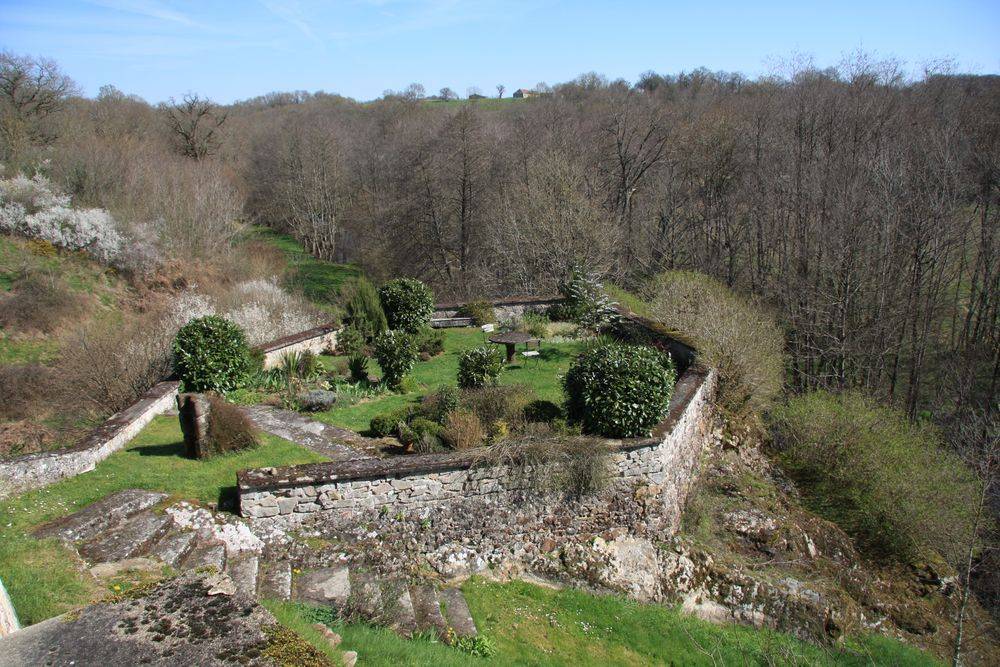 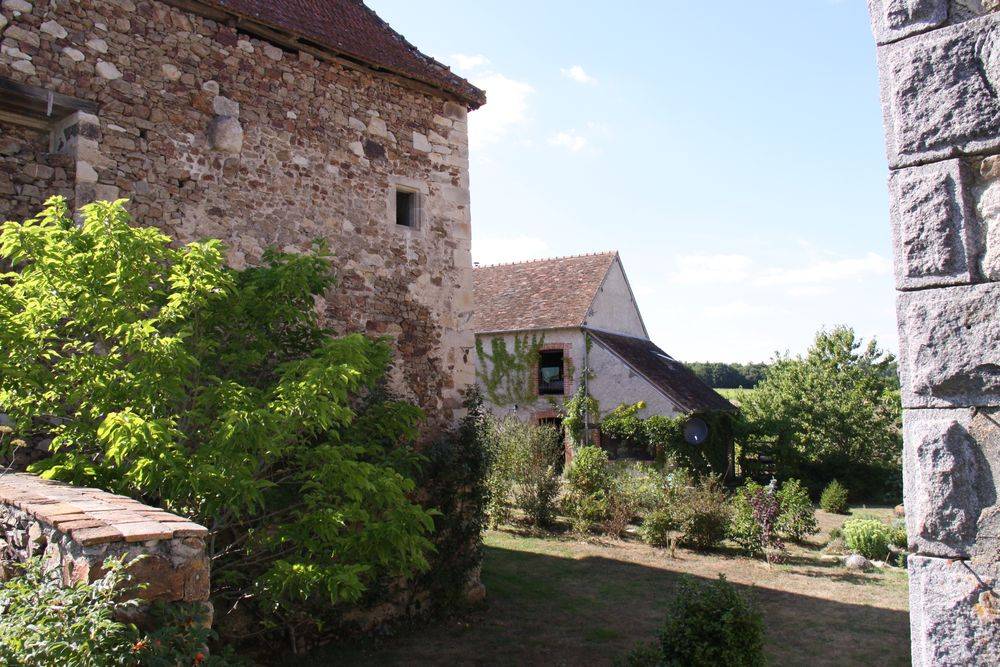 Artefacts have been discovered on the site within the past 20 years or so. These require dating, verification and authentification; however, a historian has already identified these to be a collection of ancient flint and stone tools – scrapers, knives etc and food storage pots. The tools were discovered on the banks of the river, the pots under the kitchen floor in the chateau.

Of particular note is an incident which took place in 1619 with a subsequent pardon issued by King Louis 13th to Louis de Blanchard, squire, then lord of Bourg-Archambault. Louis killed the lord of Coudray who was the son of the lord of Mareuil in a hunting incident in the woods of Bourg Archambault. This is a translation of the original transcript:-

Territory of Mareuil : Parish of Brigueil-le-Chantre concerning the Chateau of Montmorillon

Letters of mercy, given by King Louis the 13th to Louis de Blanchard, squire, lord of Bourg-Archambault, because of the sentence received for the murder of the owner of COUDRAY, son of the owner of Mareuil.

Louis, by the grace of God, King of France and of Navarre,

To all present and those to come, good day.

We have received the humble plea from Louis of BLANCHARD, knight lord of Bourg-Archambault, claiming that in the month of October 1619......(there follows an account of a part of the hunt at Champigneulles, following which a meeting had been arranged on the invitation of Louis of BLANCHARD to go hunting a roebuck undoubtedly in the woods of Bourg-Archambault.).......such that finding themselves at a gathering, the aforementioned huntsman (the Baron du RHYS) told them that he had not encountered any roebuck, except a boar which he had destroyed. On these paths the aforementioned plaintiff and the others left their menservants (au relais) with 40 dogs and after having run for 2 hours the aforementioned plaintiff and the others noticed a man who at that moment was unknown to them, who they later realised to be the lord of COUDRAY, son of the lord of MAREUIL. This lord of Mareuil was two years earlier imprisoned in our concierge of Pailays, from where he escaped during the fire of Pailays; the aforementioned COUDRAY, in hatred of all these actions looked for opportunities to meet the plaintiff and end with a duel all the criminal proceedings made against his father. For this reason, the aforementioned COUDRAY, who had espied the place where the plaintiff went on the hunt, hoping to have the opportunity to satisfy his desire, approached the aforementioned plaintiff, having a arquebus in his hand and a rifle slung across his shoulder, and a soldier near him similarly armed, and five or six men, each armed with an arquebus; and at that moment, the aforementioned COUDRAY shot a round of the arquebus at the plaintiff, who he particularly wanted to shoot, and immediately took to hand the rifle, whilst shouting: ‘Arquebusers, to me!....kill!....kill!’ Seeing this, the aforementioned plaintiff shot his gun at COUDRAY, and with his shot only hit his shoulder, and COUDRAY, retreating with his accomplices shot with the arquebus at lord BRIGNAC, who avoided the shot by the particular grace of God, and then pursued COUDRAY who returned wanting to shoot his rifle at the lord of BRIGNAC, who at the face of death saved himself with his (espee) and at the same time COUDRAY got shot in the body, and then fell to the ground and after some time died to the great regret of the aforementioned plaintiff;.......And how much this meeting came from the lord of COUDRAY and that he is the aggressor in hatred of the criminal proceedings made against his father by the plaintiff, however the plaintiff was informed on, and by the sentence made by the (precost) of the BASSE MARCHE on the 23 December 1619 was sentenced to death in his absence and fined 4000 pounds of civil damages and 2000 pounds towards US.

The King, regarding the past history of the plaintiff, and due to the edict of February 1626 relating to duels, pardons the plaintiff from the death penalty pronounced against him.

Signed on the fold: For the King: of Beaulieu. 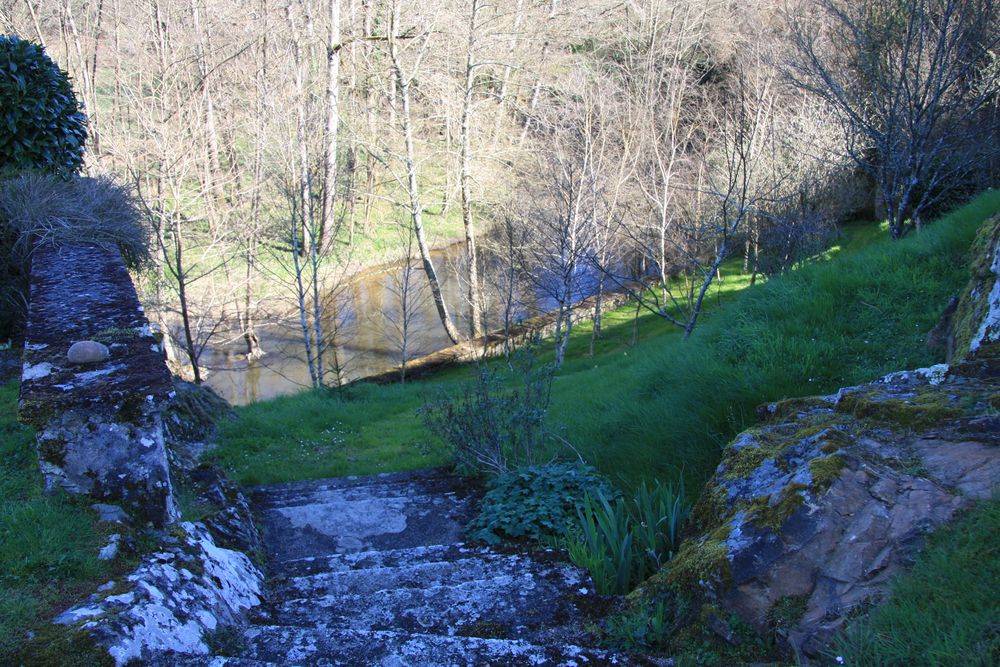 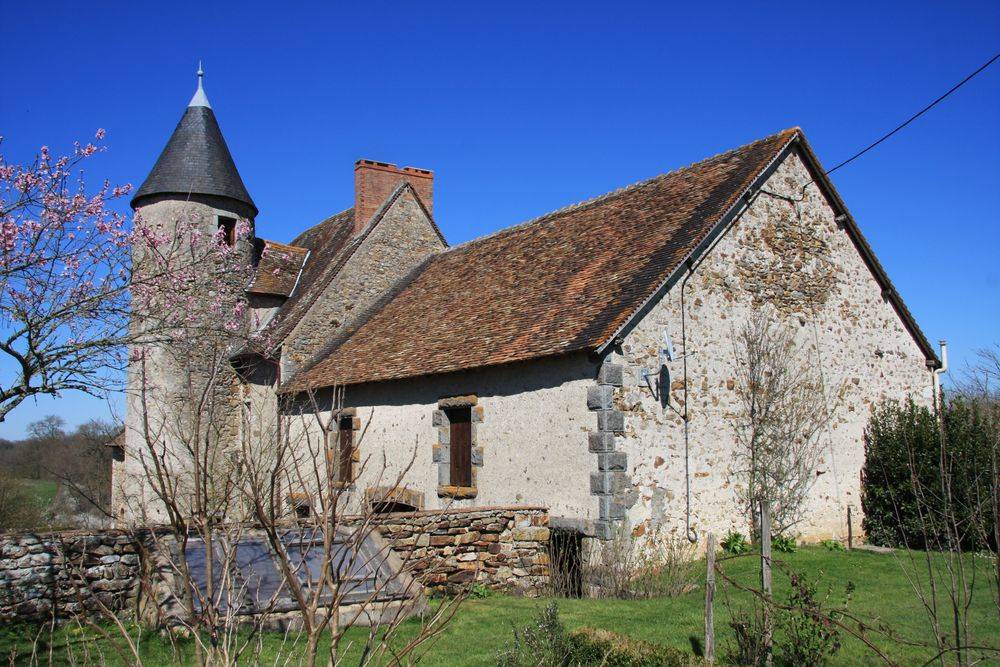 Other Myths and Stories

We have heard tell locally of a Golden Cockerel buried somewhere in the grounds here at Chateau de Mareuil, a pair of ancient gates leading out on to the river banks are adorned with only one cockerel, where is the other one? Is it made of pure gold?

We have heard a tale of a secret escape passage leading out from the chateau, this was revealed to us by an elderly guest attending a function here which was filmed by Channel 4 as part of the "Escape to the Chateau DIY" TV series.  He confirmed that he played in the tunnel as a young lad – we have not investigated this further as yet.......

In 1494, Jean 1er de Mareuil became the first lord. It is undoubtedly him who built the dwelling on the right, which later became a barn. The chateau then passed to the family of Blom. In 1619, the castle belongs to the lord of Coudray, son of the lord of Mareuil. Louis Foucault de Saint-Germain de Beaupre then Isaac Regnault de Pons succeeded him before Mareuil was, in 1767, in the hands of the Marquis de Lussac. The castle had no less than four different owners in the second half of the 19th century.

Nowadays, Mareuil still presents a beautiful set of buildings. The main body of the house is rectangular, covered with a high roof of flat tiles with two sides. In the middle of the facade, there is a circular tower with a conical slate roof and, adjoining the middle of the rear facade, a square pavilion covered with a gable, flat tile roof, not as high as that of the dwelling. The openings have unfortunately been modified. On either side of the dwelling are various buildings, a barn and outbuildings.

Old documents passed on to us by previous owners